Thank you to everyone who attending the meeting to Save Thorpe Woods on Saturday 18th January at The Dussindale Centre. It was a great meeting which was very positive and well attended. The next meet up is 2/2/2020 2.00 for a video shoot for people willing to talk about the woods direct to camera and a letter approval session. Meet at the junction of Southill Road and Plumstead Road opposite the Plant Centre. 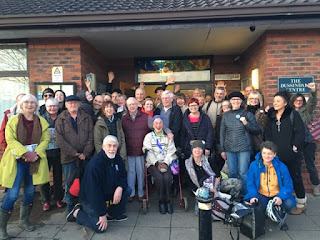 Extinction Rebellion Norwich support all who wish to Save Thorpe Woodlands from the housing development which plans to turn this valued woodland into a building site. We are in a climate emergency and need to rethink our relationship to the non-human life that is going extinct around us. We need to rethink our relationship to woodland ecosystems instead of exploiting/destroying them for profit. In December we held a symbolic picnic in the woods with local residents and members of XR Norwich. We plan a meeting on January 18th 2020 2.30-4.30 at Dussindale Community Centre, Pound Lane, NR7 0SR. EVERYONE WHO CARES FOR OUR FUTURE is welcome. Love and Rage Barbara 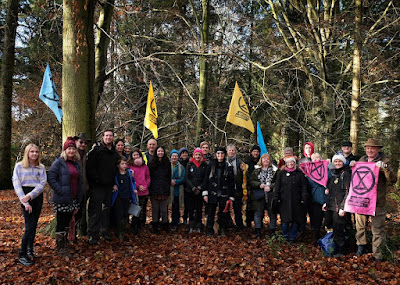 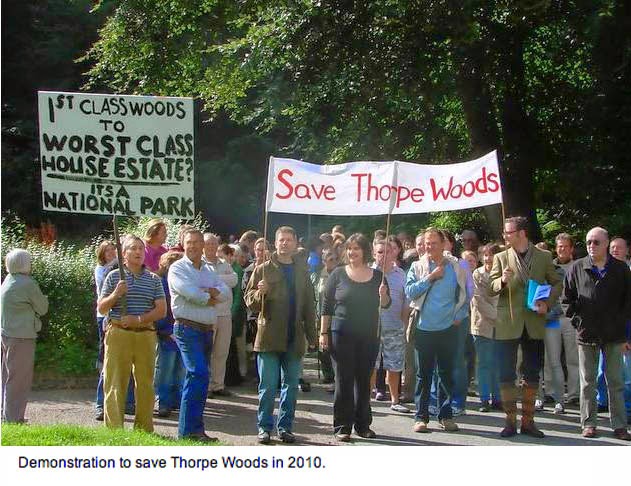 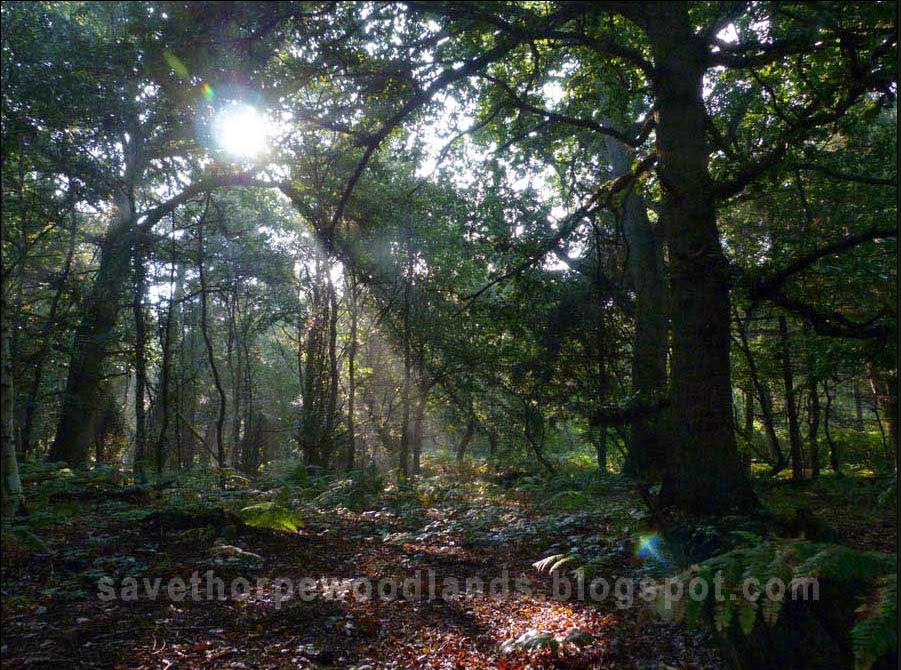 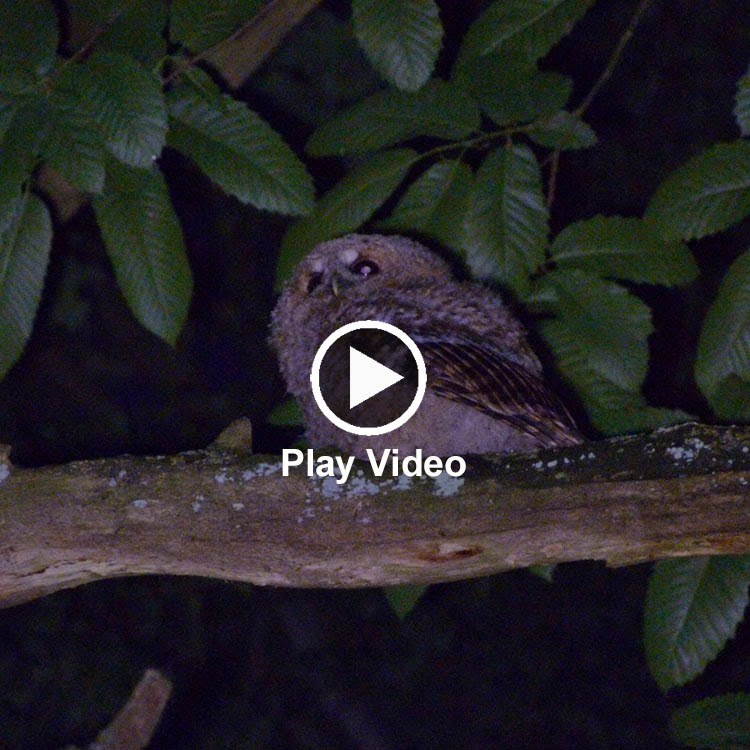 Video taken on a late evening, 4th June in Belmore wood. Followed the beautiful shrieks almost echoing as they seemingly replied to each other through the trees. Came across at least 3 young owls and filmed this one as it was on a lower limb and so a little closer to camera.
I've heard tawny owls and possibly other species of owl all across Thorpe Woodlands, photographing them before in west Racecourse.
Posted by Paul at 19:49 No comments: 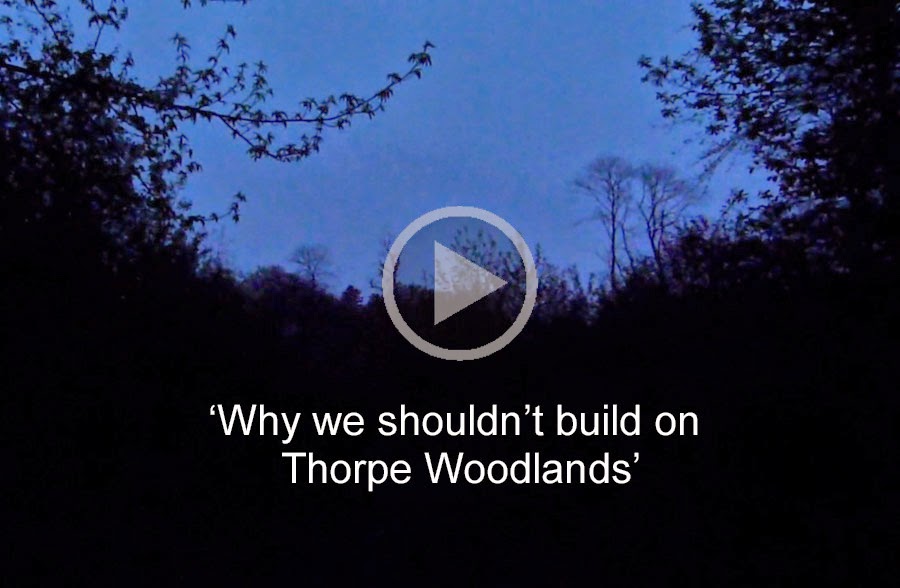 From dawn chorus to dragonflies and diversity, this short film is a final message to the councillors who have to decide on the future of these woodlands.
On the 10th June Broadland District Council will be finalising their submission documents for the Area Action Plan (AAP) This document is going out for consultation shortly. The responses to the public consultation of early last year will also weigh in their decision.
If Thorpe Woodlands are designated as 'Green Space' they will provide that and an environmentral investment for years to come.
If you wish to make your views known to your councillor again or for the first time, please do so before that date.
Thank you to all those who have.
Posted by Paul at 14:35 No comments:

Dawn Chorus plus a deer Thorpe Woodlands 1st May 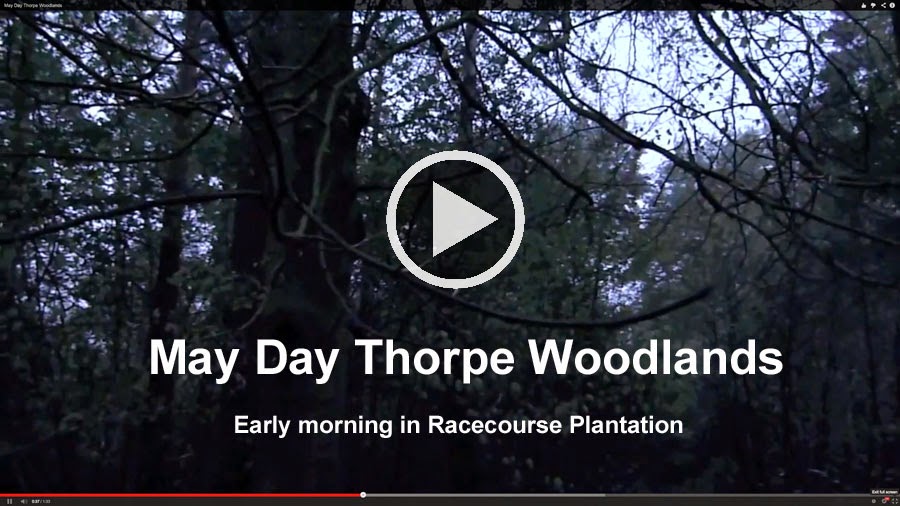 Recorded around dawn, again in the area recently proposed by Socially Conscious Capital for building development. We await news of the woodlands' inclusion or exclusion from the development area.
Posted by Paul at 09:55 No comments: 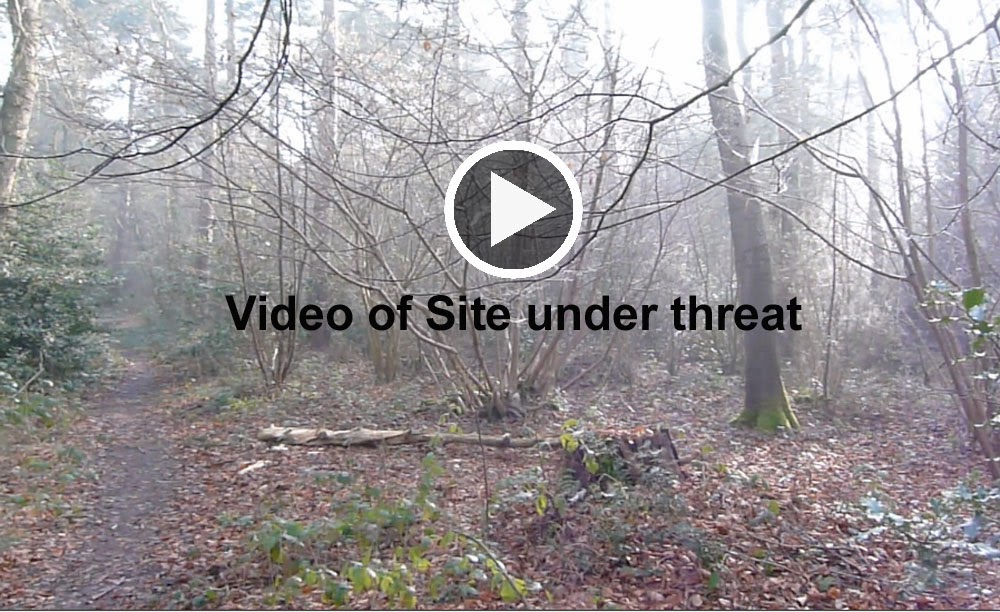 Rock Fielding Mellen and associates under the banner of 'Socially Conscious Capital' want to build a housing estate on Thorpe Woodlands County Wildlife Site, and one as big and as profitable as they can get away with.
In order to get their foot in the door, they've now decided to say ( although this figure is worthless as they refuse to give any guarantee) that they will build 380 houses, taking only a quarter or 50 acres of woodland (which in reality halves the largest habitat.)

To help ease acceptance for this, they propose an "imaginative idea", a fountain of creativity which amounts basically to creating, from the remainder of Thorpe Woodlands, a new and differently named woodlands. On the face of it this doesn't seem like much of an offer or particularly creative, and in reality it's much worse!

Thorpe Woodlands already provides a beautiful woodland area open to the public and a habitat for wildlife which is locally exceptional, so nothing would be gained. On top of this, because SCC want us to believe that nature is neither "child" or "family friendly" they say that this County Wildlife Site will need tidying and cleaning. This will involve cleared areas, "clean and safe rides", cycle tracks, picnic tables, car park, access roads, a visitor centre and even retail!
I presume there is no place in this new woodland for rides full of varied grasses, plant life and insects and certainly no place for mud. 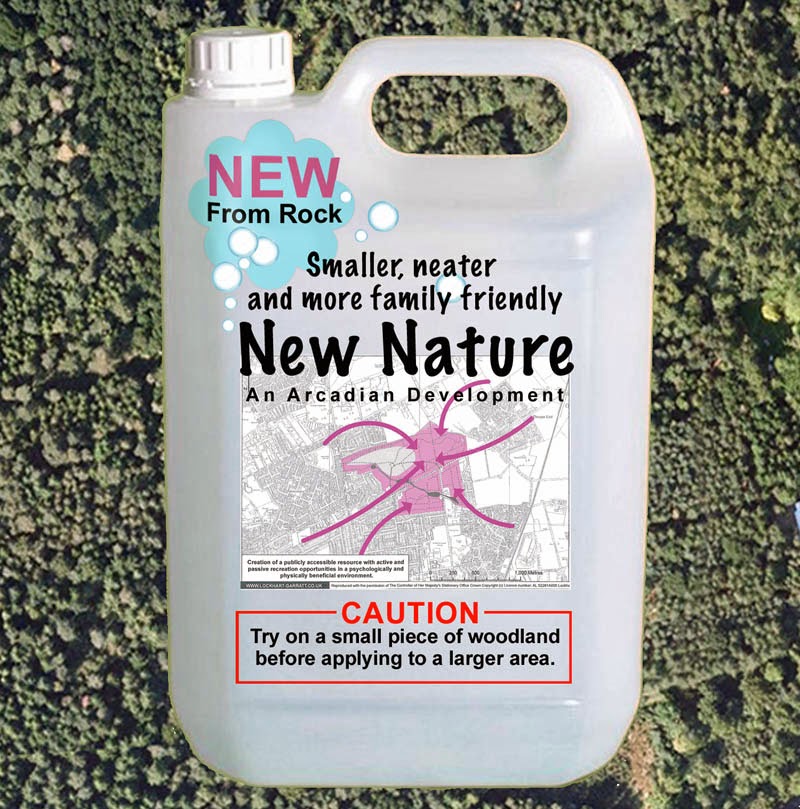 All this sanitising and construction will of course, along with the management of a "new" public woodlands, cost money.
There is no pledge on housing numbers for a reason. Firstly SCC will I'm sure be keen to cram in far more housing, and secondly SCC propose that the profit and a levy from the houses built will pay for and maintain the new "family friendly" "Racecourse Plantations" for all.

If this doesn't turn out to be the case and once SCC have planning permission, they will most likely apply to build more houses, the excuse being to make their completely unnecessary and destructive scheme viable.
SCC largely dismiss the great environmental and public value that these woodlands already have, Rock Fielding referring to most of the woods as "only for the most intrepid" and is clearly of the opinion that nature should be clean and tidy. All this, while at the same time dishonestly proclaiming that they have environmental concerns at heart.

Picnic tables and car parks on ponds where newts presently breed or rare woodland pasture where glow worms display is no more than additional destruction on top of the building plans that should never be allowed. This building on mature Woodland in order to cash in on the NE Norwich development area is simply greed, and it is pursued with an assured and well funded arrogance against all advice and with no concern for the local environment or population. This attitude was never made clearer than by Rock Fieldings' outburst at a similarly unpopular development presentation SCC were fronting on the outskirts of Edinburgh. Faced with almost complete opposition and criticism of his plans by local people his response was "The estate will not be dictated to by the village!" no wonder then, Rock and SCCs approach here.

The Forestry Option for these woodlands is the forward thinking, environmentally sustainable future for this area of key green infrastructure and the future that the people of Norwich deserve.

If the landowners reject this, then at the least this great woodland must survive and no socially blind company should be allowed to deceive us in to accepting it's destruction.


It will be a sad day if local natural environment and a sustainable future is wasted because it doesn't create enough easy money for rich landowners.

Below is what SCC call a "woodland improvement" plan including housing development (I've shaded it grey, they deceivingly coloured it green) Retail development and clean and tidy paths.
I've added/ highlighted some key points and truths here. 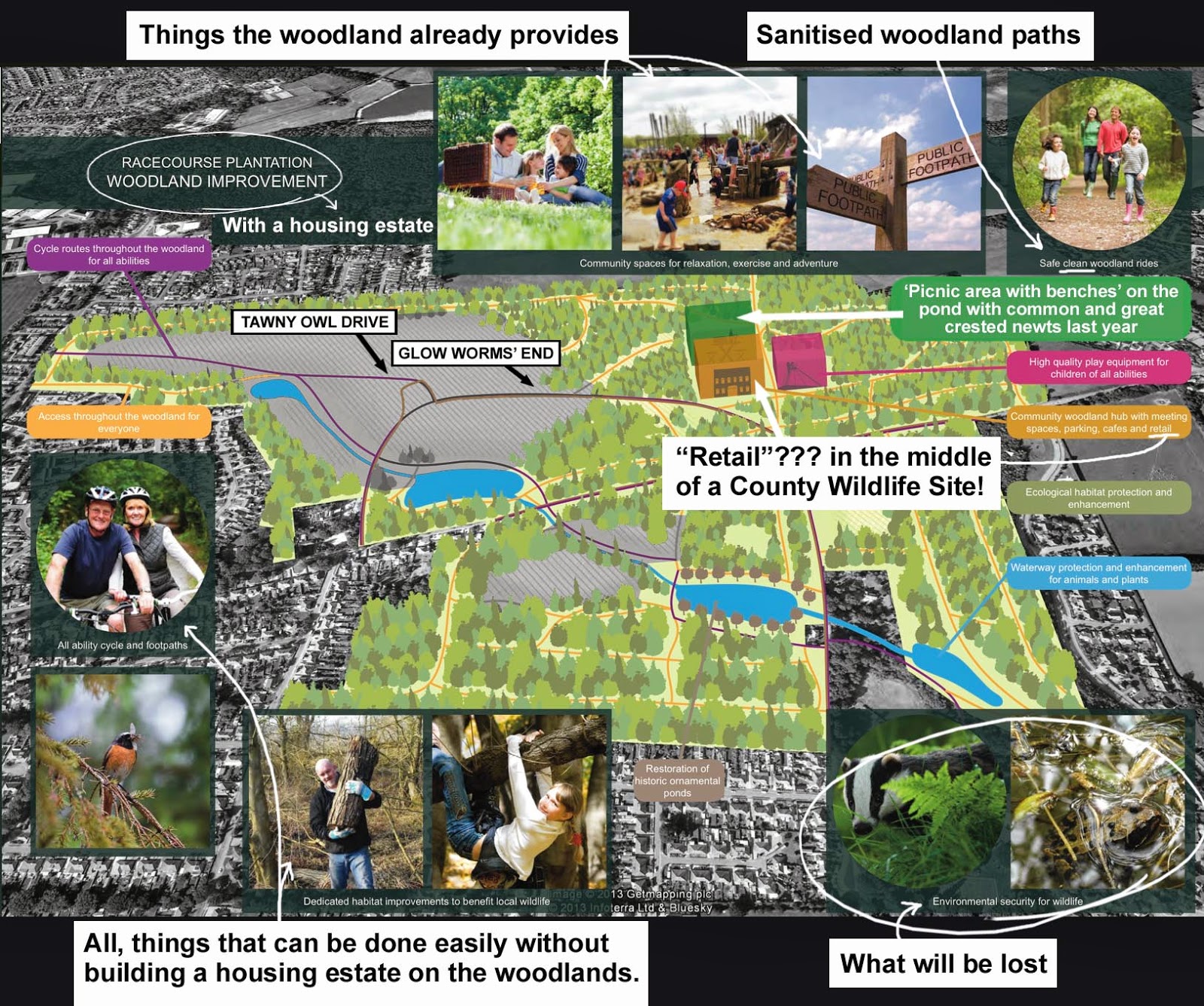 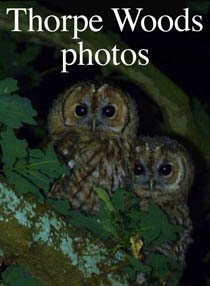 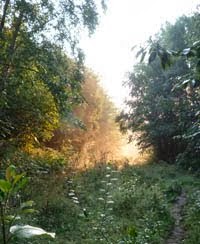